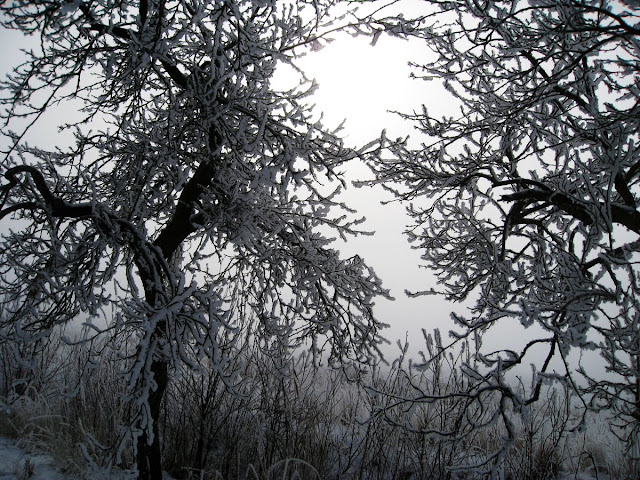 -5 and we have a winter wonderland of hoar frost. Yesterday was the first day this winter I was actually cold whilst mucking out the horses. It's going to be a long hard winter. Anyway facts about hoar frost:

Hoar frost is also called radiation frost or hoarfrost or pruina.
Hoar frost  forms on cold clear nights when heat losses into the open skies cause objects to become colder than the surrounding air.
Hoar frost is white ice crystals deposited on the ground or on objects such as the plum trees pictured above.
The word hoar  comes from the old english adjective for showing signs of old age.
Hoar frost also occurs in man made environments eg. freezers and cold stores.

Update: Mrs Fox has published some glorious hoar frost photographs on her blog Mrs Fox's do go and take a look.
Posted by essentially curious at 00:34

Email ThisBlogThis!Share to TwitterShare to FacebookShare to Pinterest
Labels: 5 things, life and times